Congressional Black Caucus Chair Karen Bass speaks during a news conference Wednesday about the House vote on Confederate statues at the U.S. Capitol. The House legislation later passed in a 305-113 vote.

Congressional Black Caucus Chair Karen Bass speaks during a news conference Wednesday about the House vote on Confederate statues at the U.S. Capitol. The House legislation later passed in a 305-113 vote.

The House of Representatives approved legislation Wednesday to remove statues honoring figures who were part of the Confederacy during the Civil War from the U.S. Capitol. The bill would also replace the bust of Chief Justice Roger Brooke Taney, author of the Supreme Court’s 1857 Dred Scott decision denying freedom to an enslaved man, and replace it with a bust of Justice Thurgood Marshall.

“It’s time to sweep away the last vestiges of Jim Crow and the dehumanizing of individuals because of the color of their skin that intruded for too long on the sacred spaces of our democracy,” House Majority Leader Steny Hoyer, D-Md., said at a press conference on Capitol Hill.

But the vote on the measure exposed a partisan divide on the issue — the bill passed 305-113. All Democrats backed the bill, but the GOP conference was split, with 72 voting for it and 113 opposing the legislation. One Republican voted present.

The move comes a day after the House approved the annual defense bill with a provision that directs the military to rename Army bases bearing names of Confederate generals. President Trump has vowed to veto the measure if it comes to his desk, but it gained a veto-proof majority. The Senate is considering a similar version that has bipartisan support.

Rep. Jim Clyburn of South Carolina, the top-ranking African American in the House Democratic Caucus, argued those saying these individuals should be viewed for their place in history missed the broader symbolism.

“When people say these are symbols of heritage and not hate, I say to them: ‘Hate is a heritage, depending on what side of history you were on.’ ”

But Clyburn said he disagreed with those who were tearing down statues around the country and instead said these statues should be preserved to give them proper perspective in museums.

Congressional Black Caucus Chair Karen Bass, D-Calif., told reporters her ancestors built the Capitol and these statues represent monuments to the people who enslaved them.

She said that protests following the killing of George Floyd in police custody in Minneapolis triggered a push for police reform but added it prompted an expanded look at American history. Referring to Taney and Confederate figures, Bass said, “Their role in history should be remembered, but it should be accurately told.”

Bass noted that there was a jail somewhere in the Capitol complex and said “maybe that would be a proper location for these statues.” 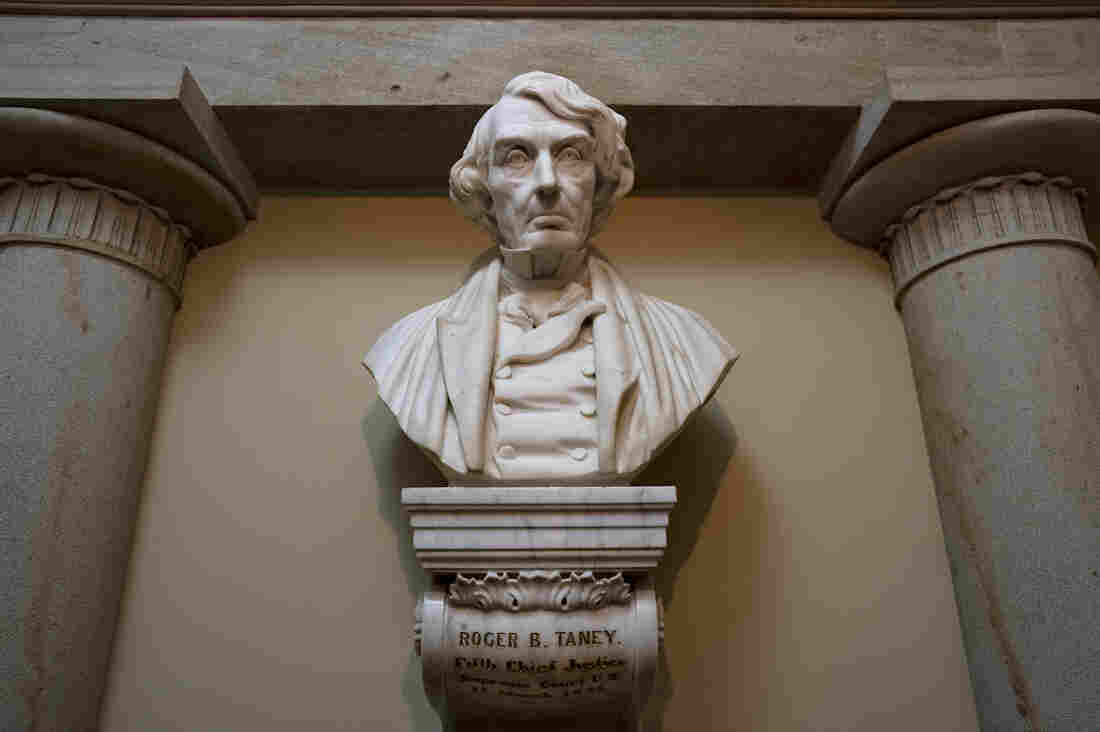 A marble bust of Chief Justice Roger Brooke Taney is displayed at the U.S. Capitol in March. Taney authored the 1857 Supreme Court decision against Dred Scott, an enslaved African American man who sued for his freedom. 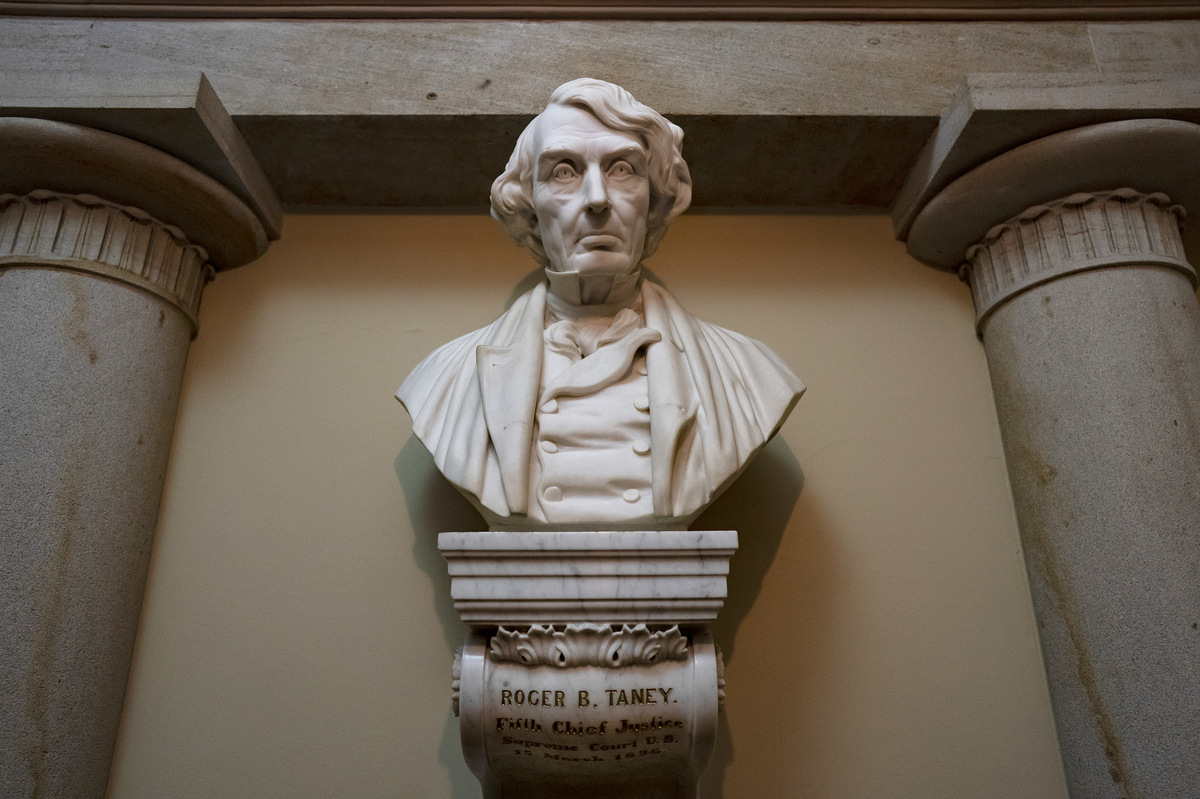 A marble bust of Chief Justice Roger Brooke Taney is displayed at the U.S. Capitol in March. Taney authored the 1857 Supreme Court decision against Dred Scott, an enslaved African American man who sued for his freedom.

Clyburn said he expected support from both parties, but the bill could face hurdles in the Senate. Senate Majority Leader Mitch McConnell, R-Ky., has said it is up to the states to decide which statues they want displayed in the Capitol. Each state is allocated two, and McConnell said recently that some are already making moves to trade out statues in favor of new historical figures.

Rep. Tom McClintock, R-Calif., said during the debate on the House floor that “the Confederacy was a fundamental attack on our Constitution and our founding principles of our nation and it should never be romanticized or honored.” But McClintock said the decision about which statues to display has always resided with the states and they should continue to do so.

He pointed out that a statue of John Breckinridge was one that could be moved and said if Congress shifted out ones of poor vice presidents “we are going to be swapping out statues like trading cards at the whim of the moment.”

The legislation does not set up a specific timeline for moving most of the statues but sets up a process for the Joint Committee of Congress on the Library to identify which figures have ties to the Confederacy.

It does call for removal of three specific statues 30 days after the bill is enacted — those of Charles Brantley Aycock, John Caldwell Calhoun and James Paul Clarke — from areas open to the public in the Capitol. The three defended slavery and segregation.

It allows some period of time for the Architect of the Capitol to store any affected statues and work with the states to make arrangements to have them moved to another location.

It also calls for the removal of Taney’s bust within 30 days of the law’s passage. It is mounted in the Old Supreme Court Chamber of the U.S. Capitol, and the bill creates a process to obtain a bust of Marshall, the high court’s first African American justice, and place it there within a minimum of two years.

Hoyer said the Dred Scott decision meant “Black lives did not matter. So, when we assert that yes, they do matter” that is out of a conviction that “the land of the free [includes] all of us.”

Following last week’s death of Rep. John Lewis, D-Ga., the 80-year-old civil rights icon viewed as the conscience of the Congress, lawmakers said the vote to change the way the Capitol honors historical figures was a way of paying tribute to Lewis’ legacy for fighting for equality.

A previous version of this story incorrectly referred to Rep. Tom McClintock as a Democrat. McClintock is a Republican.

(Bloomberg) — A federal judge won’t give preliminary approval to a proposed $18.9 million settlement between Harvey Weinstein and nine women who say he sexually assaulted or abused them, saying the tentative deal isn’t fair to other women. Harvey Weinstein, center, departs from state supreme court in New York on Jan. 27. U.S. District Judge […]

Researchers expected ‘outrageously high’ discrimination against Black renters. What they found was worse than imagined – The Boston Globe

An undercover investigation released Wednesday found that Black people posing as prospective tenants in Greater Boston were shown fewer apartments than whites and offered fewer incentives to rent, and that real estate agents cut off contact when the renters gave Black-sounding names like Lakisha, Tyrone, or Kareem. The white “testers” in the study posing as […]

Alex Brandon/AP A copy of John Bolton’s book, The Room Where It Happened, stands in the White House briefing room. On Saturday, a federal judge declined the Trump administration’s request to block the publication of the former national security adviser’s book. Updated at 12:09 p.m. ET The release of former national security adviser John Bolton’s […]