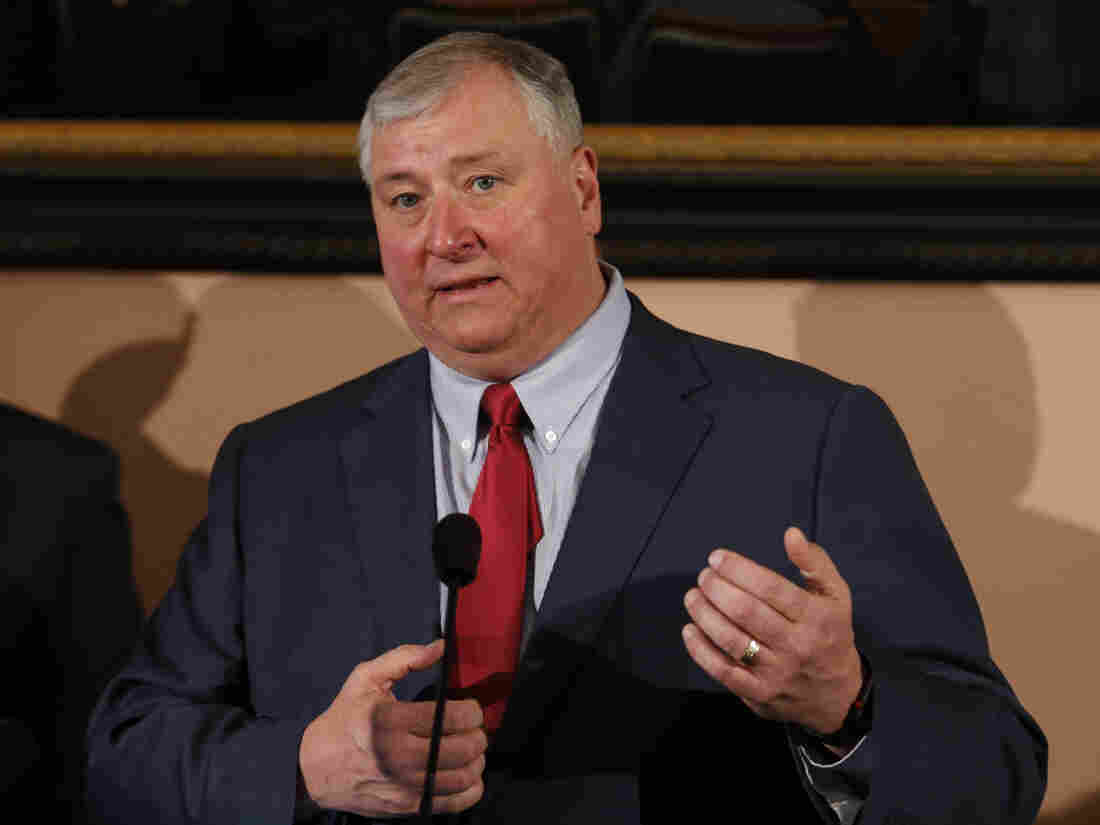 Ohio House Speaker Larry Householder was arrested on Tuesday morning, hours ahead of a planned announcement of a $60 million bribe investigation by federal prosecutors. Householder is seen here in March 2019. 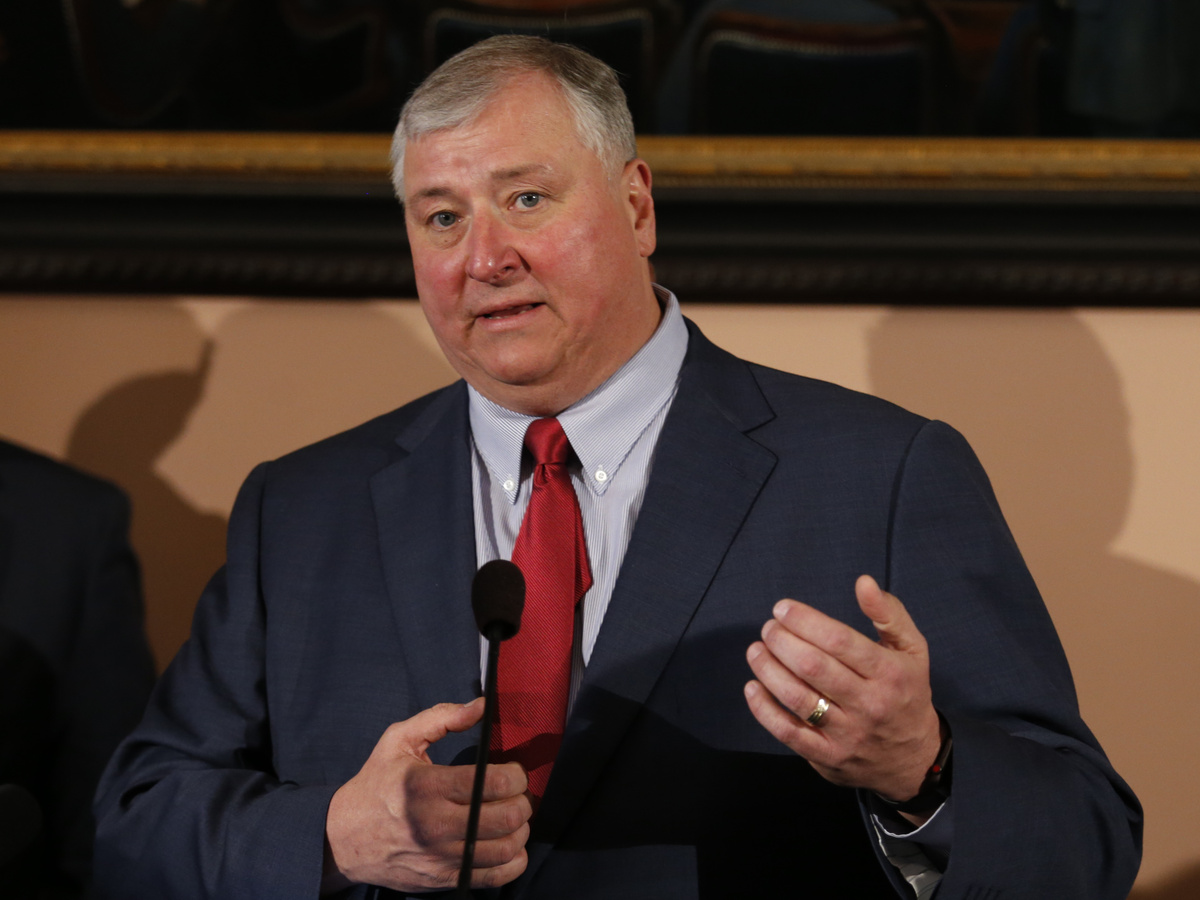 Ohio House Speaker Larry Householder was arrested on Tuesday morning, hours ahead of a planned announcement of a $60 million bribe investigation by federal prosecutors. Householder is seen here in March 2019.

The charges are linked to a controversial law passed last year that bailed out two nuclear power plants in the state while gutting subsidies for renewable energy and energy efficiency.

The federal complaint describes a years-long bribery campaign to build support for Householder’s bid to become House speaker and then pass the nuclear bailout law with his help. Householder won the speakership in January 2019, and the bailout passed in July 2019. It went into effect in October.

Householder, a Republican, represents a district east of Columbus. He first began serving in the Ohio House in 1997 and was speaker from 2001 to 2004, when he stepped down because of term limits. He then worked as Perry County auditor before returning to the House in 2017.

Householder, Longstreth, Clark, Borges and Cespedes were each charged with “conspiracy to participate, directly or indirectly, in the conduct of an enterprise’s affairs through a pattern of racketeering activity.” The charge carries a maximum of 20 years in prison.

The criminal complaint also charges Generation Now, which it describes as “a 501(c)(4) entity secretly controlled by Householder.”

Federal prosecutors say that between March 2017 and March 2020, entities related to an unnamed company — but that would appear to be nuclear power company FirstEnergy Solutions — paid approximately $60 million to Householder’s Generation Now.

“Make no mistake, this is Larry Householder’s 501 (c)(4),” U.S. Attorney David DeVillers told reporters on Tuesday. The money from the scheme was spent to the detriment of other political candidates and the people of Ohio, DeVillers said.

Members of Householder’s enterprise used those payments for their own personal benefit and to gain support for Householder’s bid to become speaker, prosecutors say.

“In the Spring and Fall of 2018, the Enterprise spent millions in Company A money to support House candidates involved in primary and general elections whom the Enterprise believed both would vote for Householder as Speaker and, ultimately, would follow his lead as Speaker and vote for bailout legislation for Company A,” the complaint states.

In exchange for payments, prosecutors say, Householder and his associates helped pass House Bill 6, then worked to ensure it went into effect by defeating a ballot initiative.

The plan worked. The complaint says Householder-backed candidates that benefited from money from Generation Now helped to elect Householder as the Speaker. House Bill 6 was introduced three months into his term – legislation worth $1.3 billion to Company A.

Regular payments to Householder’s secret company from Company A began in March 2017, a couple months after he took a trip on Company A’s private jet, according to the federal complaint. But the payments got much bigger after the legislation was introduced: In May 2019, while the bill was pending before lawmakers, Company A allegedly wired $8 million to Generation Now.

Householder and his associates used some of the money on mailers and advertising to support the legislation, and some of it for their own benefit, prosecutors say.

The bill was passed by a vote of 51-38. After the bill was signed into law by Gov. Mike DeWine, a campaign began to organize a ballot initiative to overturn the law. Company A-controlled accounts responded by wiring $38 million to Householder’s company between July and October 2019.

In total, Company A allegedly paid the Householder enterprise $60 million over a three-year period, in exchange for the billion-dollar-bailout.

Prosecutors say the payments were “akin to bags of cash – unlike campaign or PAC contributions, they were not regulated, not reported, not subject to public scrutiny—and the Enterprise freely spent the bribe payments to further the Enterprise’s political interests and to enrich themselves.”

Prosecutors say that while there are no charges yet against Company A, the investigation is ongoing.

FirstEnergy Solutions, the nuclear power plant company, was renamed Energy Harbor after it emerged from Chapter 11 bankruptcy proceedings. The Akron-based company employs about 2,600 people, according to financial disclosures from February.

“We are reviewing the complaint and will cooperate fully with the government’s investigation,” Energy Harbor said in a statement to NPR.

Householder has faced scrutiny before. In 2004, there were reports of his engaging in alleged corrupt activity, though he was never charged.

Gov. Mike DeWine called for Householder’s resignation after the charges were announced on Tuesday afternoon.

“I am deeply concerned about the allegations of wrongdoing issued today by the U.S. Attorney’s Office,” DeWine tweeted. “Because of the nature of these charges, it will be impossible for Speaker Householder to effectively lead the Ohio House of Representatives; therefore, I am calling on Speaker Householder to resign immediately. This is a sad day for Ohio.”

Last year’s nuclear bailout law tacked on a charge to residents’ power bills, sending $150 million a year to the nuclear power plants. They are owned by the company Energy Harbor, which was previously known as FirstEnergy Solutions.

The law also included a subsidy for two coal plants.

NPR member station WOSU reported that FirstEnergy contributed more than $150,000 to Ohio House Republicans in the run-up to the 2018 election — including over $25,000 in donations to Householder’s campaign.

“According to the state lobbyist database, Energy Harbor is the only client listed for Cespedes,” WOSU reported. “Borges also worked as a lobbyist for FirstEnergy Solutions, while Longstreth is connected to Generation Now, which campaigned against the bailout referendum.”

The American Wind Energy Association called for an inquiry into the circumstances of House Bill 6’s passage.

“It now appears that the passage of this bill was not just against the will of the people, but also may have involved serious and possibly criminal impropriety,” said Andrew Gohn, the association’s Eastern State Affairs Director, in a statement. “We call for a full examination of the circumstances surrounding this attack on clean energy and for Gov. DeWine and the legislature to pause implementation of HB 6 and ultimately repeal this harmful and regressive legislation.”

House Majority Leader Steny Hoyer announced last week that the House on Wednesday will take up HR 35, anti-lynching legislation introduced in the House by Democratic Rep. Bobby Rush of […]

Ellison will charge Chauvin with 2nd degree; others to be charged – StarTribune.com